Home Uncategorized Personalized communication and language use in Human-Robot Interaction

Customizing multiple communicational variables in Socially Assistive Robots (SARs) has a positive effect on perceived persuasiveness by the end-user. This finding can be used in healthcare in which a SAR can act as a medical assistant, called an E-health device. Furthermore, relations of customization and an increased acceptability were found. However, this trend was judged non-significant for the current data and should be validated first.

Another researched effect in this study is the effect of adapting the content of the message of a SAR. This is, next to
customization, another method of personalizing communication and language use in SARs. The content was adapted
by adjusting the persuasive messages to a style that fits the personality of the end-user. Effects were researched on
actual behaviour changes and perceived persuasiveness. Both effects turned out to be non-significant with the data
used in this study. However, the data shows a positive direction for adapted persuasion on perceived persuasiveness.
Hence, this effect is worth further investigation.

Both methods of personalization that are researched in this study may be valuable for the use of SARs as E-health
devices. These devices can be used for interventions, for example to help elderly in their daily structure by
reminding them of medicine intake or suggesting to go for a walk. These interventions may benefit from
acceptability and (perceived) persuasiveness. This, in turn, may lead to more usage of E-health devices, as they are
currently underused. Eventually, the use of E-health devices is important since the domain of healthcare is
experiencing personnel shortages because of the aging society. 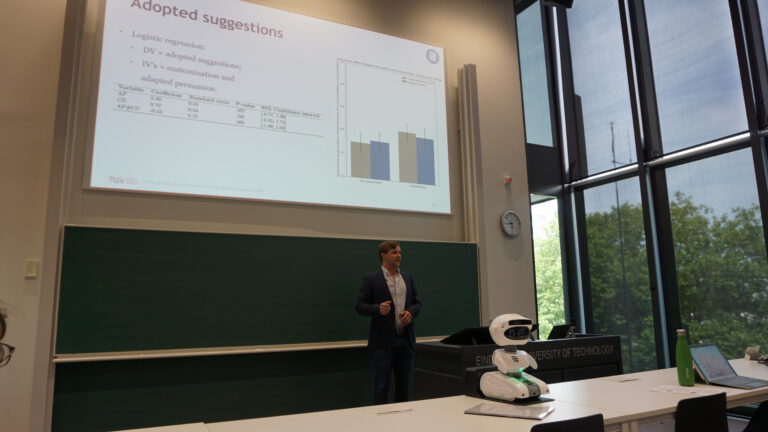 Personalization is a machine’s attribute to adapt to the user’s likes and dislikes. In the domain of Human-Robot
Interaction (HRI), personalization can be applied in four different themes: (1) communication and language use, (2)
behaviour and service, (3) proxemics, and (4) interface and design. Customization is a process in which the end-user
can set preferences for certain variables themselves. The relation between customizing multiple variables and
acceptability has been researched in the theme interface and design. Because of the positive effects, it was expected
to occur in the theme communication and language use as wel. A focus group with possible end-users led to six
customizable variables: volume, speaking rate, waiting time between sentences, gender of the voice, formalness and
discourse (friendly vs. dominant). The data showed an increase of acceptability after participants were allowed to
customize these variables, however, this increase was non-significant with the currently used data.

Adapted persuasion was tested in the desert survival task. Participants were told being in the desert and they were
offered five items to survive, but they could only take four. After making their choice, the SAR (Misty II) provided
an argument on why to change their choice. The argument was based on the Susceptibility To Persuasion Scale
(STPS) which is a questionnaire aimed at indicating which persuasion style fits best to a person. Three persuasion
styles were used: authority, commitment, and consensus. Results showed no effect on the amount of actual adopted
suggestions. A small increase was found on perceived persuasiveness, however, this effect was non-significant. It is
recommended to investigate the effects of adapted persuasion in future research.

Because of the positive effect of customization on perceived persuasiveness, and the increase in acceptability
(although non-significant), it can be recommended to include this process in SARs that are being used as E-health
devices. Doing so, can bolster to overcome personnel shortages in healthcare.

In Geneva, we are currently Beta testing the Guardian system. The goal is to resolve the identified problems on the prototypes, in order to obtain a better fitting version.The users are practicing the services daily for a 2 weeks trial. Caregivers from distance and seniors from home.  Formal caregivers, for example family members, and informal […]