Developing an advanced robot that supports older people, community nurses and caregivers. That is the aim of the international project Guardian. Vilans researcher and coordinator of the Guardian project Henk Herman Nap: “With the Guardian robot, the caregiver remotely knows where his/her client has fallen, the robot can drive to the person and a video connection can be established.”

The project, which lasts 3 years, had the kick-off on February 25, 2020 at Vilans in The Netherlands. Both national and international partners were present. The rationale for the project is the increasing pressure on the healthcare professional and caregiver: an increasing demand that is not only happening in the Netherlands, but also in neighbouring European countries.

Nap: “A major challenge is that informal caregivers find it increasingly difficult to continue their work in addition to the care tasks they already have. And when you also consider the increasing shortages in healthcare, the burden can become even higher. With Guardian, we therefore want to develop a robot companion with which the district nurse and informal caregiver can monitor his client, family or neighbour remotely. We focus on healthcare professionals and informal carers who care for older people who live at home. “ 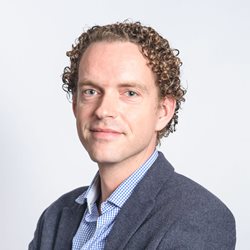 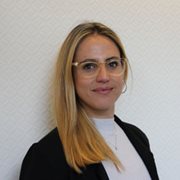 Engineer Sara Casaccia from “Università Politechnica delle Marche”: “We are involved in the systematic development of the robot’s architecture. Among other things, we are developing an app with which the care professional can give reminders and advice to the caregiver. The big advantage of Guardian? The older person will not need a separate application to interact with the robot. All technology is incorporated in the robot itself. “

Nap: “The Guardian robot is going to be more widely deployable and much more advanced than existing models. For example, it contains several sensors that, like a radar, could create an accurate image of the house, so that the robot knows where the person is and what may be going on. The robot can also move through the house. Thanks to a 4G chip, the robot can also be used as a video phone. The robot’s eyes are displays that can express emotions or display other information. You can also add additional modules such as processing module to make the robot more intelligent. And if the robot’s battery is empty, it will look for a charging point itself. “ 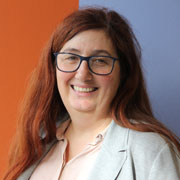 Lorena Rossi, Instituto Nazionale Riposo e Cura Anziani: We carry out the co-creation and experiments with professionals, caregivers and older people themselves. I believe in this project, but it will be a challenge to properly weigh the robot’s interaction options with the cost of the system. The robot should not be too expensive for a successful implementation. We have a lot of work to do in the next 3 years. “

In co-creation with older people

Nap: “We use existing models that we will further develop. We do this in co-creation with (frail) older people, community nurses and caregivers. With them we study which functionalities really have added value. Think of information about the well-being of the person, a health analysis and focus on fall prevention. We are also developing an app for the district nurse and caregiver. Via the app they can receive insight in the lives and health status of the seniors with data from the sensors and measuring instruments. “

Professor Katarzyna Wac of the University of Geneva: “I am the manager of a lab that measures the quality of life of seniors and caregivers with data. For example, by measuring sleep, physical activities and social interactions. We are also developing a sensor that enables a new way of measuring. We believe that with this project we can make a difference in supporting informal caregivers. “

Nap: “In addition to co-creation, we also include business modeling and ethics issues from the start in this project. For example, the commercial/development partners are already weighing up the costs and benefits. They also examine in which country the robot can best be produced. We are also already thinking about what the influence is on privacy and transparency and what possible unforeseen side effects can be. ”

“Vilans researcher Dirk Lukkien focuses in the project on “Responsible Innovation” and ethics. Eindhoven University of Technology pays attention to the social interaction between the elderly and the robot. This way, the robot shouldn’t get too close, because that is intimidating. For example, the University of Geneva is involved, because it is an expert in measuring physiological measures, happiness and quality of life. The company smartrobot.solutions and JEF are very good at using the sensors in the robot and providing insight into radar images of where a person is in space. As Vilans, we manage the project and are responsible for ethical management and knowledge dissemination. We also support co-creation with the end users. “

Nothing about us, without us: early involvement in co-creation is critical in designing care technologies

As life expectancy increases, so too does the cost of healthcare. This is especially true across Europe where a large portion of the silver economy is driven by the care needs of people choosing to live independently at home longer. In addition to the challenges this situation poses for governments and the wider health eco-system, […]

The University Politecnica delle Marche (UNIVPM) in Italy is involved in, among others, the technological development of social robot Guardian. Researcher Sara Casaccia: ‘In providing care services, a social robot like Guardian can limit the trips to hospital and the GP for older persons and their informal carers. This is beneficial in times of a […]